Whilst scores of people are suffering financially during the COVID-19 pandemic, two enterprising brothers – both Udayan ex-students have harnessed their entrepreneurial skills during the lockdown, to kickstart their own enterprise.

Sandip and Joydeb Mahato, from Purulia, saw an opportunity to invest in a new tractor and use it to support farmers in sowing crops during the farming season, thereby earning Rs 800 per hour.  They even identified an opportunity in the farming off-season to use the tractor to deliver construction materials such as bricks, cement, sand and stone. 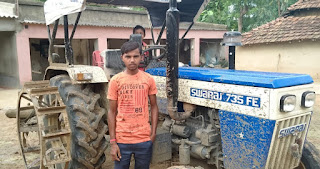 The brothers are no stranger to working with heavy equipment and both cut their teeth working in Pune at Autocomp Corporation Panse Pvt Ltd – one as a Machine Operator and the other as a Crane Operator. The boys are second and third sons of Bidyadhar Mahato, who was leprosy-affected and died in 2011. Bidyadhar was a daily labourer in agricultural fields with nominal wages.

In 2003, Sandip was admitted to Udayan and spent 9 years earning an education. He passed the Madhyamik Examination and transitioned to the nearby George Telegraph Training Institute to receive mechanical training in Air Conditioning and Refrigerator Machine. He soon got a job at a company.

Following his brother’s footsteps, Joydeb went to Udayan in 2008 and cleared his exams in 2016. He too got an opportunity to be trained at Sandip’s company. Earning Rs 20,000 and Rs 22,000 respectively, the boys managed to save up enough money. They could not only support their family but purchased a tractor and invested in their own business and future.

Post lockdown, Joydeb will continue working with this tractor and Sandip will return to his company job.