Children, the Most Vulnerable

Before the introduction of multi-drug therapy (MDT), there was no effective cure for leprosy, and therefore people affected by the disease were isolated in leprosy colonies or leprosarium. This segregation was often enforced by law. As effective treatment and cure became available, many of these colonies were closed; but in a vast, developing country like India, they still exist in large numbers. 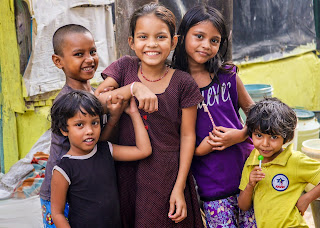 Life in leprosy colonies offers few opportunities for the future.

•       Pathways to livelihood are often limited to rag-picking, daily labouring and begging (for those with deformities).

•       The future for girls is limited to early child marriage, prostitution or becoming a maid.

And it is children, who are often the most vulnerable.

Risks at Every Turn

The children of leprosy-affected families face risks at every turn.

•       Risk of Disease – Leprosy is only contagious after prolonged contact with a person who is not undergoing treatment. Children are therefore most at risk of contracting the disease from other family members who they live in close proximity with.

•       Malnutrition – Leprosy and poverty go hand in hand. And the first impact of poverty is on the health and nutrition of family members. With Leprosy affected people earning as little as 1500Rs per month, there is little money for 3 meals a day and everyone in the household suffers as a result.

•       Lack of Education – Accessing education is fraught with difficulty at every turn: enrolment, transport to and from school, money for educational materials and accessing tutors are hurdles to jump. Leprosy affected children are ostracized in the classroom by teachers and peers, as well as bullied in the playground – impacting their ability to learn and grow into strong, confident adults.

•       Unsafe Environment – Risks abound in a Leprosy Colony. Girls are vulnerable to being trafficked for prostitution or face harassment or abuse by older boys. Boys are susceptible to getting up to mischief, falling into alcohol or drugs or into petty crime. Violence is common. Substance abuse rife. A Colony is not a safe place for children to grow up in.

•       Poverty - Leprosy has long been known as a disease of poverty and then leprosy itself, along with its disabilities and stigma, further pushes them toward poverty. This poverty becomes intergenerational as children are affected by the lack of money, lack of opportunity and the risks that come with poverty.

In order to break the intergenerational cycle of leprosy and poverty, childrenmust be given the chance to rise above leprosy – and Educationand Livelihoods provides the key …

This is what Udayan aims to do!